Since the inception of Talibanization, there is no evidence of tattooing but the recent attack on Bacha Khan Airport has turned the strategy upside down. A 'Western-style' tattoo on the back of one of the 10 terrorists involved in 15 December, 2012 attack on Peshawar airport has created a buzz around the world. The art of tattooing is as old as humans; some scientists believe that certain marks on the skin of the Iceman-a mummified human body dating from about 3300 B.C.-are tattoos. If that’s true, these markings represent the earliest known evidence of the practice.

The research of Michigan State University is further claiming that Tattoos found on Egyptian and Nubian mummies date from about 2000 B.C It was also a surprise for the security forces in the KPK province, which are fighting against terrorism since 2001 and said "in Pakistan, It is the first time that I have seen tattoos on the bodies of terrorists," one of the officials said on the scene. Security forces explained the mystery of tattoo in their investigative reports and said that the image, though incomplete, appears to be an interpretation of a Boris Vallejo sorcery-fantasy character. Vallejo, a Peruvian-born American painter, works almost exclusively in the fantasy and erotica genres. Swords and sorcery gods and monsters are some of his recurrent themes. In country like Pakistan, where new incident happens with such speed that people hardly remembered any event older than 48 hours but the Tattoo saga is still hot to be discussed in media and in public places "Skulls, in my opinion, are demonic representations, but only in visualization. T

hey represent strength, rebelliousness and serious drawbacks. Mostly people who get such tattoos want to give out a message that they defy death, those who have seen death very closely, including criminals, gangsters and even rock stars," said a Lahore-based tattoo artist, Mr. Amjad told to local media. Commenting on the tattoo on the militant's body, he said, "It looks 10 to 12 years old. The outlines, curves and shading clearly tell that it has not been made by an expert."

The media reported, In Islam Tattooing is prohibited in strong words and the majority of Muslims consider permanent tattoos to be haram, based on an oral tradition (hadith) of the Prophet Muhammad. Karachi based Islamic Scholar; Mufti Naeem said that “Tattooing is considered "mutilating" the body, changing Allah's creation” he further explained that “It inflicts unnecessary pain, and introduces the possibility of infection” Tattooing on militant body, gave a strong justification to the Islamist political parties in Pakistan about their view  regarding Taliban that Taliban are not Muslims and are foreigners working for western agenda  While the America is using these tattoo as a clue to reach out to these militant groups and has already disseminated a circular to tattoo shops and stated: “Preventing terrorism is a community effort.

By learning what to look for, you can make a positive contribution in the fight against terrorism. The partnership between the community and law enforcement is essential to the success of anti-terrorism efforts. Some of the activities, taken individually, could be innocent and must be examined by law enforcement professionals in a larger context to determine whether there is a basis to investigate. The activities outlined on this handout are by no means all-inclusive but have been compiled from a review of terrorist events over several years. 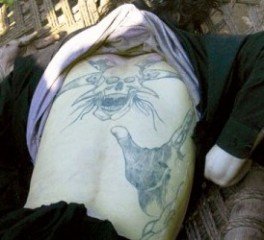