The overall objective of my this assignment is to produce an easily understandable, publicly accessible, and well-accepted video documentary aimed at Early marriages and its consequences on the lives of girls in Pakistan, for Kadam Communications & Consultant Pakistan. 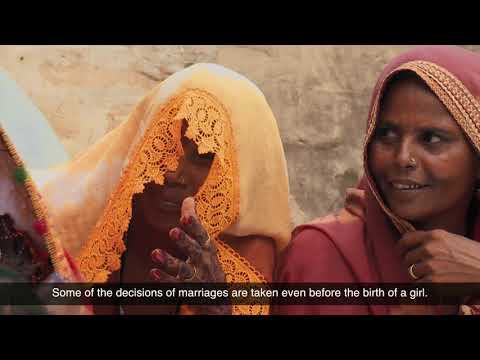 Koya Howa Bachpan is an Urdu Language word, which means the "the lost childhood" as early or child marriages are resulted in lost childhood for thousands of Childs in Pakistan and South Asia.

What is child marriage or Early marriages?

Child, early or forced marriage or unions are a violation of children’s human rights. Despite being prohibited by international law, it continues to rob millions of girls under 18 around the world of their childhood.[1] Child marriage refers to any formal marriage or informal union between a child under the age of 18 and an adult or another child. While the prevalence of child marriage has decreased worldwide – from one in four girls married a decade ago to approximately one in five today – the practice remains widespread. Before the COVID-19 pandemic, more than 100 million girls were expected to marry before their eighteenth birthday in the next decade. Now, up to 10 million more girls will be at risk of becoming child brides as a result of the pandemic. The United Nations Sustainable Development Goals call for global action to end this human rights violation by 2030.[2]

Early marriage is a harmful practice that denies girls their right to make vital decisions about their sexual health and well-being. It forces them out of education and into a life of poor prospects, with an increased risk of violence, abuse, ill health or early death. Child marriage is often the result of entrenched gender inequality, making girls disproportionately affected by the practice. Globally, the prevalence of child marriage among boys is just one sixth that among girls. Child marriage robs girls of their childhood and threatens their lives and health. Girls who marry before 18 are more likely to experience domestic violence and less likely to remain in school. They have worse economic and health outcomes than their unmarried peers, which are eventually passed down to their own children, further straining a country’s capacity to provide quality health and education services. Child brides often become pregnant during adolescence, when the risk of complications during pregnancy and childbirth increases – for themselves and their infants. The practice can also isolate girls from family and friends and exclude them from participating in their communities, taking a heavy toll on their physical and psychological well-being. Because child marriage impacts a girl’s health, future and family, it imposes substantial economic costs at the national level, too, with major implications for development and prosperity.

According to a UNICEF report in 2013, 21 per cent of girls were married before the age of 18 in Pakistan. Factors leading to child marriage are poverty, tradition, customs, religious beliefs, flawed legislation, inadequate enforcement of the laws, and incapable birth registry for age determination. Through its Child Marriages Restraint Act of 2013, Sindh is the only province that prohibits marriage below 18, yet it has the highest prevalence of child marriages amongst the provinces. The rest prohibit the marriage of girls younger than 16 and boys younger than 18. These laws are often met with resistance, labelled non-Islamic and overruled by some courts. But more recently, exemplary decisions were made against some cases of child marriage. These decisions will set examples for future cases. Pakistan’s current law sets the legal marriage age at 16 for girls and 18 for boys, setting different, and thereby discriminatory, marriage ages for girls and boys. But even this law is rarely enforced, as the Pakistani courts often apply Sharia (Islamic law) instead, which they interpret as allowing any girl who has gone through puberty to marry